Hint  1: haiku are really short poems. In Japanese they are written in seventeen Japanese style syllables. Japanese count these syllables in a different way than we count syllables in English.

SO haiku poems in English often have less syllables than 17 in order to get a poem as short as Japanese haiku.

Hint  2: Japanese language haiku poems usually (but not always) are written in three sections of five, seven and five syllables. The haiku is traditionally written in one vertical line. Translations often make this into a three line horizontal poem.
Because of all the differences between English and Japanese, English language haiku are very often written not in sections of five, seven and five syllables, but in shorter sections. Maybe three, five three. Or two six, four. Just as long as it is a short poem (usually less than 17 English type syllables) that is okay.

SO don't bother to make a five, seven five poem. Concentrate instead on making an interesting poem.

Hint 3. haiku poems tend to be about things you can see, smell, taste, hear, touch. They are more about these kind of things than describing abstract ideas or by telling the reader how to think about something. The haiku poet describes the world and lets the reader work out his or her own feelings and thoughts by interpreting the images in the poem. It is a bit like an artist painting a painting and letting the viewer interpret the painting for his or herself.

Hint 4. So how do you go about making a haiku poem?
Japanese often use a 'kireji' (special word for letting the reader or listener know that there is a pause), which is like a comma in English, to divide the haiku into two parts.
We don't have words like this in English, so we use a way of saying things that will have the same effect of breaking the haiku into two parts. That is why a haiku in English is hardly ever a run on sentence. One of the hardest things (Lynettea said, and of course being a cat I don't find it difficult) is to put your haiku thoughts into this structure.

So, try to make your haiku poem in two parts. Not one sentence and not three short phrases. You can have one part as a fragment, such as 'early morning mist' or 'thunder' or really anything you like. The next part will be longer and run on for two lines. Lynettea says I can use this example that she wrote:

Hint 5. What are season words (kigo)?  Japanese language traditional haiku use a word showing what season the haiku is set in. This might be: winter or summer. On the other hand it might not mention the season, but might say cricket calling, or deep snow, or describe some activity that falls in a particular season.
In English many haiku don't use a season word and might not even show a season at all. So you can please yourself.

Hint 6. Your haiku poem needs an 'aha' moment. This is where the reader says, 'Aha! fancy that.' Or 'well, goodness me, that is what it is.' You can think of all sorts of other expressions that might indicate the surprise and pleasure of the reader in making a new discovery.  In the two haiku above you can see the 'aha' moments in the third line.

Take the king tide haiku. You see first of all a king tide, which is the name for an extra full tide on the east coast of Australia (and probably other places as well). This usually occurs around Christmas, so you could use that as a season word, if you were very keen and knowledgeable. Then you read the second line - the bay is rippling, not an unusual occurrence, the wind makes the water ripple, the incoming waves as the tide pushes up the beach also make the water ripple. But now we see the third line and 'aha' the bay is rippling with jellyfish. See their slow pulsation and the movement of their tentacles. What a surprise!

Hint 7. Let the reader do the work. Don't tell the reader what to think, just put the images before the reader and let her (or him) work out what to think. Here is one of mine that I allowed Lynettea to put in her book (Pause in the Conversation). She doesn't know what it means - a mystery to her and I like to keep it that way.

quiet morning --
the cat inspects the blue
of the lizard's tongue


Hint 8. Some other small things to keep in mind when you write your haiku. Haiku only have capital letters when the word would normally have capital letters in English. They also do not use much punctuation. Don’t bother to put a full stop at the end of the poem. Sometimes the haiku poet uses a dash or an ellipsis to separate the two parts of the poem, the fragment and the phrase, particularly when the meaning would not be clear otherwise. You can usually get away with no punctuation at all.


Hint 9. Most haiku are written in the present tense to make the experience very vivid for the reader. Haiku are like little telegrams (if you want to use an old fashioned word) from the poet to the reader. Maybe they could also be thought of as twitter type poems. The birds would like that idea.

Next we will look at what is haiku and what is senryu.

NOTE BY DAWN (SHUBUNKIN) in memory of Diamond


Diamond got too old and tired to finish his haiku hints. I think he would want me to learn and write some more helpful hints. He was very keen on sharing his knowledge with others and he loved writing his works. The Australian National Library published two of Diamond's poems in their Little Book of Cats and he also helped Lynettea by contributing some of his poems to help her whenever she ran out of ideas (quite often).

meowmeowmans said…
Great hints, Diamond! We love learning from such a learned Haiku master as you!
March 14, 2012 at 2:10 AM

TK and Pip said…
This is very interesting. Now me wants to sees more poetry.

BelindaBroughton said…
Sasha, I know these are Diamond's hints, but I thought you would like to know that I am linking to them on my blog (I am a human and a friend of your human)
http://belindabroughton.wordpress.com/links/
July 31, 2014 at 8:44 AM

Sasha said…
Thank you Belinda. Lynettea tells me you write very good haiku and tanka and we hope your readers benefit from Diamond's hints. He tried to explain them so cats who had never written haiku could give it a go.
Sasha
July 31, 2014 at 9:25 AM 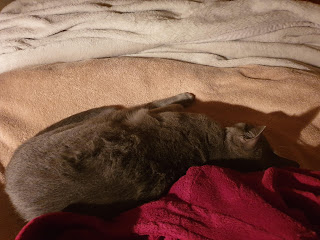 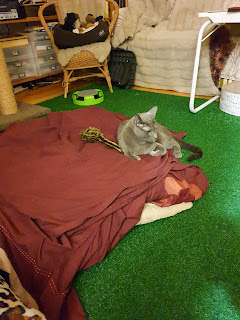 Sasha
I am a Russian Blue Cat, born on 13 February 2013. Some of my interests are: birdwatching, insect watching, flowers, grass, fishwatching, having my fur brushed, supervision. I am really good at supervising.

Friends of other Species